A Scene From Jellystone Park.

Interior- A ranger's station in Jellystone Park. A ranger sits at a desk. A Visitor walks up to him.

Ranger: How could I help you, sir?

Visitor: Yes, I'd like to report an incident that happened this afternoon.


Ranger: Okay, let me just get out the incident report form [pulls form out of drawer]. So, what would you like to report?

Visitor: My picnic basket was stolen. By a bear.

Ranger: Uh-huh. Can you describe this bear?

Visitor: Well, he was brown and walked on two legs. He was wearing a green hat and a green tie. Strange thing, he was also wearing a shirt collar with no shirt.

Ranger: Anything else? Anything unusual?

Visitor: Well, he talked for one thing. And he sounded a lot like Art Carney from The Honeymooners. Also, he was with another bear. A very small bear. I don't know if it was a cub or some kind of dwarf bear or something.

Ranger: If this is who I think it is, no one really knows the answer to that. Anything you can tell us about the smaller bear?

Visitor: Yeah. He wore a bow tie. Also, his voice sounded kind of depressed and whiny.

Ranger: Okay, we're definitely getting a clear picture here. Can you describe the events as they happened?

Visitor: Well, I set the basket on the table and turned around to get something. Then, when I wasn't looking, he shot an arrow with a big suction cup on it at the basket and dragged it off the table. Then he started running with it. I tried chasing after him but I must have been going in circles because I kept passing by the same landmarks over and over again.

Ranger: Yeah, that happens around here. One of the quirks of the park. You probably should have kept going. You'd have gotten there eventually. What were the contents of the basket?

Ranger: Standard picnic lunch for Jellystone. Now the last and most important question: Was this bear funny?

Visitor: Hmm. You know, it's kind of hard to describe it. He was sort of mildly amusing but not laugh out loud funny.

Ranger: Yup, that's Yogi alright! I'm going to call this one down to Smith. He's had some experience with this specific bear. We'll get your picnic basket back, sir. I hope this incident won't ruin your visit to our beautiful Jellystone Park 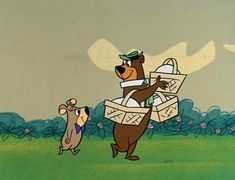