You know, it strikes me just now that since I did a post on superhero moms for Mother’s Day, that I should do a post on superhero dads for Father’s day.  The thing is that comics’ relationship with fatherhood is kind of a different ball of wax.  Because of the more boy-oriented past of superhero comics, paternal narratives actually abound.

They’re filled with fathers and father figures who are practically deified and serve as inspirations.  Like Thomas Wayne, Jor-El and Ben Parker.  And of course there are fathers who are literal gods like Odin and Highfather. There are also fathers who serve as warnings and antagonists.  Fathers like Thanos, Darkseid, Fu Manchu and . . . oh yeah . . . Satan himself. 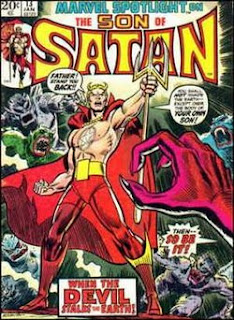 And we could argue that Magneto walks the line between those two.

And then there are cases where the hero becomes a father only for it to be undone in the name of creating more tragedy or because editorial decided it had been a mistake in the first place.  Like when Aquaman’s son Arthur Curry Jr. was killed by Black Manta.  Or when Spider-Man and Mary Jane’s child ended up being stillborn because of a poisoning (at least there was an alternate universe comic with the child as Spider-Girl).  Or how Cyclops’s son Nathan was infected with a sci-fi virus and then sent to the future to be cured.  And don’t even get me started on Wolverine and his relationship with his son Daken.

The dead baby/sad dad stories are probably as close as this category comes to the weird pregnancy stories in the other category.

So, yeah, paternal narratives are by and large about creating pain for the hero or the hero trying to either live up to or move beyond their father (it’s surprising how many male coming-of-age themes are tied up with characters that aren’t even all that young anymore).

Starting in the ‘60s, Mr. Fantastic was a father.  Maybe a little boring, but he did the job well.  Going back to the ‘80s, we have the second Ant-Man, aka Scott Lang.  Though he was often a bit of a flake, he was never an evil dad or a godlike inspiring one either.  In the ‘90s we had Thunderstrike, a character who spun out from the Thor mythos.  He struggled with his role a bit but always tried to do right by his son Kevin.
A more recent example though, is Luke Cage.  He had a child years ago with fellow Netflix star Jessica Jones.  Also, through a little bit of retconning, Black Lightning has two grown daughters named Thunder and Lightning. 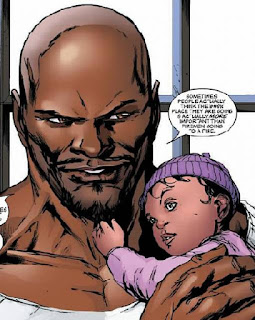 And here’s a big one: both Superman and Batman are fathers over at DC.  Superman’s son Jon Kent is the new Superboy and Batman’s son Damian Wayne is the latest Robin.  There were some comic book plot tricks employed to make both “Super Sons” 10 years old, but most comic book fans I’ve encountered seem to find them a welcome addition.  And both Clark and Bruce seem to be doing a good job of parenting. 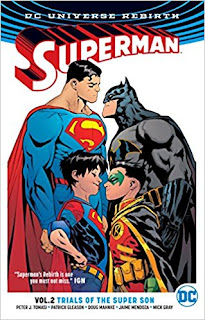 These are probably the best examples I can think of, aside from more indie stuff like Saga (Marko is a pretty good dad).  Most depictions of fatherhood seem to still be of the dead dad/evil dad/angsty dad type.  However, things are changing slowly but surely.

So, to all the super dads out there just trying to do your best, Happy Father’s Day!
Posted by Adam Hoffman at 5:45 AM