So, it’s finally happened.  The brand new Duck Tales series has premiered on Disney XD.  The series that once defined the course of Disney cartoon shows on TV for an entire decade is getting a new chance at life.

For the uninitiated, Duck Tales is a cartoon series loosely adapted from the Uncle Scrooge comic books created by cartoonist Carl Barks (that’s right, Disney doesn’t even adapt its own stuff all that faithfully).
The show and comics focused on Donald Duck’s uncle Scrooge McDuck, the richest and cheapest duck in the world, as he travels around the world with various family members in tow on adventures largely aimed at finding treasure and making him even richer.

I recently had the chance to rewatch the original series and I thought I’d write out a few of my impressions of the original show as well as first impressions of the new show’s pilot (Yes, I know this is coming right after my Smurfs post.  I promise this blog won’t be just about ‘80s cartoons.  Well, less than 80% at least).
First of all, let’s go over some observations I had of the original show.  In the original Duck Tales, the set up is that Donald Duck has to go off to do a tour of duty in the Navy and has to leave his three nephews Huey, Dewey and Louie with his own uncle Scrooge McDuck.  Donald would only appear on the show in a guest star status.  Anyway, this situation leads to the previously mentioned adventures.  One of the things that I particularly noticed in the old show is how every character is useful to some extent.  Even the characters who don’t always get the acknowledgement they should.  One of the most notable is Webbigail Vanderquack.  Webby gets a lot of flack because she comes across as a cliché, girly-girl, tag-along type of character that no one wanted around for the adventures.  And that is true to an extent.  However, it also seems to me that Webby was intended to be younger than the boys early on (in one episode they ride bicycles while she rides a Big Wheel), so naturally she’d need a lot more looking after in dangerous situations.  That at least explains some of the other characters’ attitudes toward her.  But when she was on adventures, she was usually a big help because of her amazing knack for befriending animals.  Kangaroos, hounds, baby dinosaurs, etc.  In one episode she even made friends with a yeti.  Webby was always the first character to solve problems through communication and friendship.  While that may be a stereotypical trait for the “token girl”, it’s also something we could probably use a lot more of in the world.  That’s not all, though.  Mrs. Beakley, the boys’ nanny, is remembered for being a disapproving old woman but she’s shown to be brave, a quick thinker, former world traveler and an accomplished opera singer (and yes, that does prove useful in one episode).  Even the butler Duckworth leads a mutiny on an alien spaceship in one episode.  The funny thing is that this is something fans should have seen all along because it’s the case with a lot of the characters.  Their best traits aren’t always their most memorable traits.  Heck, one of the most beloved characters on the show is Launchpad McQuack.  The defining trait for Launchpad is that he’s a pilot but a really bad one.  He crashes pretty much every plane he flies.  However, Launchpad is also daring and willing to try anything to get out of a jam.  Those are his good points.  Mainly he’s remembered as a really bad pilot, though.  So, why do fans love Launchpad so much even though he’s possibly the most dangerously inept character in the show?  I guess maybe because he was played as the comic relief.

As the show wore on, they tried adding some new characters to the show.  Some worked better than others.  The first one they tried adding was Bubba Duck.  Bubba was a Caveduck that Scrooge and family brought back from the distant past.  Bubba was an okay character, but the problem was that he didn’t really bring a lot to the show.  Bubba was crazy strong and had a pet dinosaur named Tootsie, but that didn’t necessarily add much story-wise.  The other character they added was Fenton Crackshell aka Gizmoduck.  Gizmoduck worked a lot better.  The idea was that he was McDuck Enterprises’ new head of security and own private superhero.  This is kind of neat, because he’s actually an Iron Man parody from the days before Iron Man had the mainstream popularity he has now.  But the real strength of Gizmoduck is that it gave Duck Tales another story option before the show ended.  They could still do their treasure-hunting adventure stories but they could also stay in Duckburg and do more of a crime-stopping sort of story featuring Gizmoduck.  Those two options were now there.

In terms of story, the show was usually really solid.  Some episodes are based on Carl Barks comic stories but a lot aren’t.  It’s actually fun to watch as a culture savvy adult, because a lot of episodes will focus on one specific type of adventure fiction and drop multiple references to it.  For example, there’s one episode that’s entirely a riff on Alexander Dumas novels.  There are references to The Three Musketeers, The Man in the Iron Mask and The Count of Monte Cristo throughout the episode.  Another episode does the whole “boy raised in the jungle” thing and references both Tarzan of the Apes and The Phantom.

Now, the new Duck Tales is a different matter.

Only the pilot has aired so far, but it shows a different set up.  This time, Donald Duck is trying to go to a job interview but finds that he can’t leave Huey, Dewey and Louie alone because their mischief will invariably lead to calamity.  So, with no other babysitting options left, he calls on his Uncle Scrooge who he hasn’t talked to in ten years because of some mutual bad blood between them.  The Scrooge we see here is someone who, as the boys say, “used to be a big deal”.  He hasn’t adventured in a long time and the boys and Webby manage to draw him into one.  The whole story manages to culminate in Donald and the boys all moving into McDuck Manor with Scrooge with more adventures surely to follow.  The interesting thing about the new Duck Tales is how well thought out it seems to be.  While family was always present in the show, here it becomes the main theme of the show and the characters’ personalities are written to emphasize this and drive character interaction.  Huey, Dewey and Louie, while good characters in their own way, are usually depicted as being the same in terms of personality.  However, that changes in the new Duck Tales as their personalities are defined by their birth order.  Huey is the smart and responsible oldest boy.  Dewey is the eager, adventurous middle child who wants to stand out.  Louie is a laid back youngest child who embraces the chance to get away with what he can.  Other attempts have been made to differentiate the boys (see Quack Pack), but this seems a lot more deliberate and intended to drive story and character interaction.  Webby is also revamped.  Instead of being the little sister who wants to tag along with the big kids, she’s a peer of the boys who’s spent her life being prepared for any eventuality by her grandmother while likewise being sheltered from any danger.  So, her desire to go along on adventures isn’t simply a desire to go along with the big kids but stems from the frustration of spending your life being prepared for something that likely isn’t going to happen.  I will admit that I will kind of miss the old Webby and her gentler ways, but I’m also interested to see what they do with the new Webby.  Here’s hoping she still has her way with animals.  Probably the biggest change is the inclusion of Donald Duck in the main cast, something that was part of the old Uncle Scrooge comics but not the old show.  Including Donald as well as the bad blood between Donald and Scrooge adds not only a new dynamic but also provides a mystery that the show can develop: What exactly happened 10 years ago to drive Scrooge and Donald apart (there’s a bit more to it, but I’m not going to spoil it).

So, Duck Tales is back and truth be told, it’s just as good as ever.  It’s different but it still has the sense of adventure the original show and comics had.

So, what could be next for Disney television animation?

Maybe giving a certain mouse the comedy adventure show he should have had a long time ago? 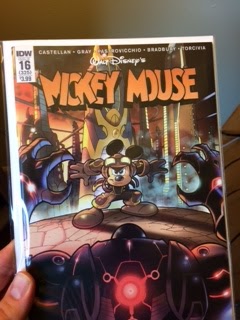 Who am I kidding?  Disney would never do anything that interesting with Mickey Mouse.  But at least we have Duck Tales.

Later.
Posted by Adam Hoffman at 3:42 PM No comments: