When it comes to manga and anime, I tend to surprise myself.  The genres and titles I expect to like often fail to spark my interest for the long term.  However, titles I might not have expected will often become my favorites.  When I first started reading manga, I thought I’d like shonen battle manga like Naruto, Bleach and FullmetalAlchemist because they seemed to be the closest equivalent to the superhero comics I grew up with.  Instead, I found I didn’t have much of a taste for the battles that seemed to drag on for multiple volumes or the constant “I must become stronger” mindset.  Instead, my manga genres of choice ended up being mystery, sports, cooking and even the occasional harem comedy.

However, it’s rare that I jump the gender divide and read or watch something from the shoujo (girls’) or josei (women’s) demographics.  So, it surprised me a bit when I ended up binge-watching all of Sailor Moon Crystal  on Hulu.  I knew of SailorMoon, mind you.  Back in the ‘90s, it was one of the few anime to get a foothold on TV here in the United States before the Toonami boom.  Then after that, it would make a comeback on said Toonami block.  However, I had never watched it all that intently.  So, I decided to do as deep a dive as I could into the “magical girls” genre and see what I could figure out about its appeal. 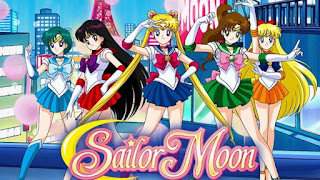 Now, when I first approached this subject, my knowledge of the genre was limited.  I mostly knew of it in terms of Sailor Moon and to a lesser extent Cardcaptor Sakura and Tokyo Mew Mew (both of the last two were brought to the U.S. as Cardcaptors and Mew Mew Power respectively).  I also had a vague awareness of the PreCure franchise.  So, the way I saw it based on Sailor Moon was that the magical girls genre could be summed up as “like superheroes but frillier”.  You know what I mean: villains, special powers, secret identities and fighting the good fight.  All of it done while wearing skirts and bows and wielding sparkly pink accessories.   However, while that is true to an extent, it’s not completely true.  While some magical girls could be quantified as superheroes, not all are.  I put together a basic Venn diagram so you could get the gist of it, but it doesn’t include every possible property or franchise. 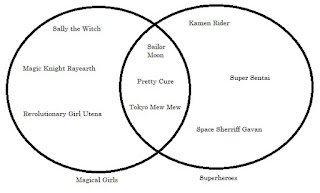 The biggest thing that seems to define the magical girl genre are young, female lead characters with some kind of magical power (duh).  Sometimes it involves a transformation, sometimes it doesn’t.  There’s usually a romantic subplot, but not necessarily (like, 98% of the time).  The main lead will often have a power related to healing of purification, but again not in every case.  For every rule there is an exception and for every exception there is a rule.

So, what did I think of all of it?  Well, let’s set the parameters, first.  During this dive into magical girl territory, I mainly read them in manga form with a few anime sprinkled in.  The titles I read were Wedding Peach, Tokyo Mew Mew, Magic Knight Rayearth, Pichi Pichi Pitch Mermaid Melody, Phantom Thief Jeanne, Shugo Chara and Cardcaptor Sakura.  The anime I watched were Sailor Moon, Princess Tutu and the original Pretty Cure. 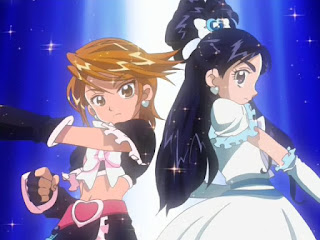 As expected, I leaned more towards the ones that had more superheroic tendencies.  Sailor Moon remains a favorite.  Tokyo Mew Mew is also good.  Tokyo Mew Mew kind of reminds me of Spider-Man.  For one, it embraces a science fiction origin in terms of how its characters gained animal powers.  Also, how the main character frets over how her hero duties interfere with her romantic relationship.  Shugo Chara also proved to be a surprise favorite.  I just find the concept rather clever.  The whole thing revolves around people creating heart eggs which hatch into Guardian Characters, which represent a kind of person who the person wants to be.  The main character Amu uses these characters to transform into different magical girl forms.  So, her heroic forms are idealized versions of herself amped up to superheroic proportions.  Amulet Heart is peppy and athletic.  Amulet Spade is artistic.  Amulet Clover is super-skilled at domestic tasks like cooking.  And Amulet Diamond is a cool idol (read as: singer/actress/model).  Instead of it just being “here’s you transformed by magic”, it’s “here’s who you want to be but dialed up to eleven”.  I also really liked the original version of Pretty Cure, which I found on the free streaming service Tubi.  What surprised me in that series was how much physical combat there was.  Shows like Sailor Moon tended to focus on magical and energy attacks.  Cure Black and Cure White, on the other hand, tended to actually get in there and mix it up.  Princess Tutu, which is kind of superhero-y but also about ballet and storytelling and oddly meta, is a series I’ve watched before and is always good.  Seriously, watch Princess Tutu. 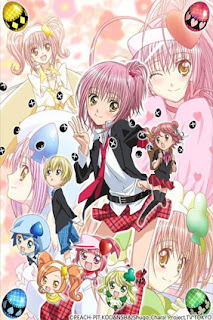 There were a couple of magical girl series that I liked that didn’t quite overlap into superhero territory.  Incidentally, both of them were created by the artist collective CLAMP.  Magic Knight Rayearth is a magical girl story about three high school girls who get whisked away to an epic fantasy world and made into magic knights.  They set off with the idea that they’re there for one specific mission only to find they’re there for completely different reasons that create all sorts of negative consequences.  It’s a well-written and well-drawn fantasy series and one that is surprisingly funny in spots.  The other series is Cardcaptor Sakura, which is a little bit closer to an urban fantasy in execution.  It’s about a girl named Sakura Kinomoto who accidentally releases a set of magical Clow Cards into the world and then with the help of the cards’ guardian and her friends, finds them and recaptures them.  This much I knew and expected from the TV show Cardcaptors, which was a heavily edited version of Cardcaptor Sakura (it had an awesome theme song, though).  What I didn’t expect was a light romance comic that seemingly discards any sense of strict sexuality and all the identity politics that come with it.  At least during the first half of the series (haven’t read the second half yet), almost every character seems to be at least bisexual.  Sakura herself has a crush on her older brother’s friend but also talks about how her new female teacher makes her “feel all floaty”.  Meanwhile, her rival is a boy named Li Syaoran.  He’s on the books as becoming a love interest for Sakura later, but also has a crush on her brother’s friend.  The lack of identity politics is actually kind of refreshing.  Here in the U.S., such ideas often seem to get whittled down into who people identify as and what “team” they’re on.  Still, there are some elements that might make American audiences uneasy.  The fact that so much is made of romance in a story where the main character and her rival are about nine years old might bother some people (they are a little young to be so worried about all that).  There’s also a romantic relationship suggested between one of Sakura’s elementary school classmates and her teacher, which might raise a few red flags with people. 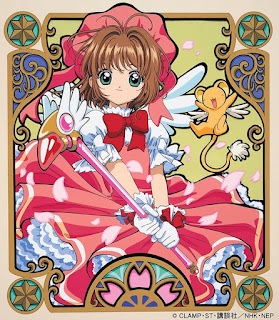 Other manga didn’t impress me much.  Phantom Thief Jeanne I stopped reading after one digest.  One of the ones I found particularly disappointing was a series entitled Wedding Peach.  It starts off with the rather crazy premise of the goddess Aphrodite choosing a girl to become the heroine Wedding Peach in order to defend love from demons and retrieve the legendary “four somethings” (something old, something new, something borrowed and something blue).  The really noteworthy part being that her first demon-fighting costume is a big, floofy wedding dress.  As the series goes on though, it changes first to a shorter, almost lingerie-like outfit and then to a sort of Wonder Woman-like outfit but with hearts and angel wings on it.  And then it’s just kind of finding treasures and fighting demons.  Also, a typical will they/won’t they semi-antagonistic, semi-romantic relationship between the main character and one of her classmates.  The whole wedding theme sounds odd and crazy enough that it could be fun, but ultimately the execution of the whole thing proves to be kind of boring and conventional.

Overall though, I enjoyed what I saw.  The ones that did lean in more of a superhero direction, really do tend to read more like the American superhero comics I grew up reading.  It may seem a bit strange at first glance considering how oriented towards romance magical girl manga is.  But then, Spider-Man was always more concerned about his love life than a lot of other things.  Heck, the X-Men comics have often been regarded by fans as just being a big, long, complicated soap opera.  Someone once made the case that the writing of American romance comics from the ‘50s had a big impact on how superheroes were written from the ‘60s onward and I believe them.  As for how the magical heroine stories match up against the battle heroes over on the shonen side of the street, I’d say it’s favorable.  In the magical girl stories, there’s a lot less macho posturing, a lot less obsessing over strength or rivalries and a lot more focus on communal qualities like friendship and love.

I’ve really just scratched the surface, though.  I didn’t even touch the manga and anime that subvert the genre and take it past the usual bounds of girls’ romance stories.  Manga like Puella Madoka Magica, which depicts becoming a magical girl as more of a dark, Faustian pact.  Or Magical Girl Spec-Ops Asuka, which near as I can tell asks the question “What if magical girls were the result of a secret military project?”.  I’m not finished yet, though.  I’m still reading Shugo Chara and Cardcaptor Sakura as well as watching Sailor Moon.  Heck, thanks to Tubi I just discovered a magical girl idol series called Fancy Lala. 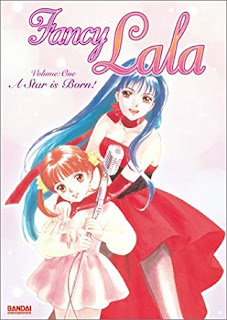 I’ll try my best to keep up with them.  You see, I’ve started reading some other manga series.  Staying true to form, I’ve developed an interest in yet another unexpected genre.  This time, it’s . . . romantic comedies.  I’ve begun reading manga like The Quintessential Quintuplets, We Never Learn, Wotakoi, Kaguya-sama: Love isWar and even some more risqué fare like Ao-chan Can’t Study.

When it comes to anime and manga, you never know what you might like until you try it.

Posted by Adam Hoffman at 5:35 AM No comments: