Okay, folks.  I think we’re going to continue on the subject of manga with adult characters and adult themes (not naughty themes, just grown-up ones).  Why?  Because I’ve been reading a lot of manga lately.  It’s as good a reason as any other.

So, once again I’ll raise the colors. 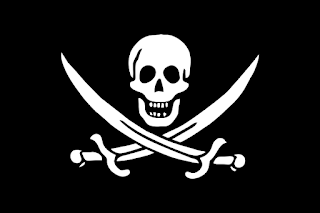 The same rules apply as the last time I raised the pirate flag.  I’m not going to tell you where to find the series in question.  I urge you to support any official releases these manga may get.  Also, I will give you one completely legal recommendation.

So, our theme for today’s post is: Parenting.  Yeah, I know it may feel like a throwback to my “superhero moms” and “superhero dads” posts.  However, as I’ve gotten older and seen my peers take on the role of parent, I’ve developed a new respect for the moms and dads out there trying to do their best to raise their kids up right.  There are some good and some unique depictions of parenting in manga.  There are also some questionable ones.  But I’m getting ahead of myself.  Here are my favorite manga featurimng parents at this time:

I’m a Middle-Aged Man Who Got My Adventurer’s License Revoked , but I’m Enjoying a Carefree Lifestyle Because I Have an Adorable Daughter Now by Fumi Tadaura and Manimani Ononata. 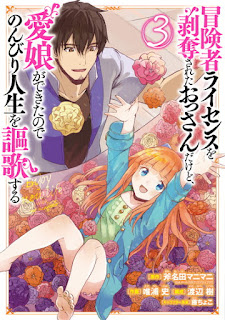 Yes, that is the full title.  There seems to be a trend of manga, anime and light novels with very long, descriptive titles these days.  This is a series set in a video game-esque fantasy world.  The main character is a magic-user named Douglas.  Once an adventurer, now in his late 30s his powers and health seem to have declined and his adventurer’s license is revoked.  He resigns himself to a life of aimless travel and odd jobs until he comes upon a cursed little girl named Ravi.  He soon finds that his own illness and Ravi’s curse may not be so random and they both seem to point in the same direction.  That’s just one thing occupying his mind though, as Douglas is also preoccupied with work, travel and taking care of the little girl who has fallen into his life.
While I enjoy this one so far, I’m including this one a bit tentatively.  That’s because there’s a bit of a trend in adoptive parent stories in manga, anime and light novels like this one that I am desperately hoping this series does not stray into.  I’ll discuss that more later. 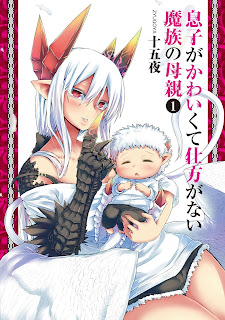 In English, the title translates to “My Son is so Cute, I Just Can’t Help Myself!”.  Think of this series as a sort of spiritual companion to the “Demon Bride” series I talked about in the last post.  The series is largely about a demon named Lorem and her baby son Gospel as they go about their daily lives.  Other characters that pop up include Lorem’s sister Meri and her human friend Sera.  For the most part it’s a very light series with much cuteness in it.
Bambi to Dhole by Okaue Ai. 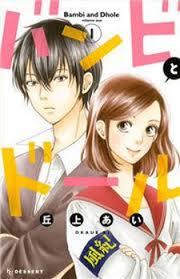 Teen parenthood is a tough topic to tackle anywhere.  And it’s easy to think that with its sometimes strict approach to family and education, it wouldn’t happen in Japan.  But the truth is that it happens pretty much everywhere.  This manga (among others) takes on this thorny topic to some extent.  Yukimi (called Bambi because the characters of her name can also be read that way) is a seemingly strict student council president who has a less law-abiding side herself.  She runs afoul of a lone wolf named Tetsu Nagasawa who seems to flout her authority.  She later discovers that there’s more to Nagasawa than she thought, including that he’s father to a two-year old boy named Raichi.  This one is a shoujo manga (aimed at teenage girls), but it does aim for some tougher material.  In addition to teen parenting, chronic illness also figures in as well as Yukimi’s past as an abandoned child.

I Became the Mother of the Strongest Demon Lord’s 10 Children in Another World by Ema Toyama. 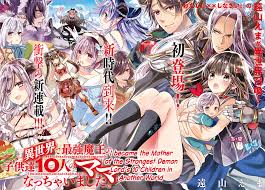 Speaking of teenage parents, and by extension teen pregnancy.  I’m including this one too even though it’s a bit of a guilty pleasure.  High school girl Akari lives with her single mother until tragedy strikes and Akari’s mother dies saving her from an oncoming truck.  After that day, coping with the loss, it becomes Akari’s dream to be as good a mother as her own was.  That dream doesn’t keep Akari from being lonely.  Then suddenly she’s summoned to the world of a fantasy video game that her mother bought her for her last birthday.  There, she is told that she is the “Great Priestess” and it is her duty to bear the children of the Demon Lord Gran so that they may defeat the human kingdom.  This is admittedly a bit of a strange one.  So far, Akari’s had two children and they were both born through magical means with no sex involved.  The first chapter even suggests that they’ll all be born while Akari’s still a virgin.  Despite its strangeness, it can also be kind of a sweet manga about finding a home and building a family in an unexpected place with unexpected people and through unexpected means.  It also has its funny moments.  A similar manga for those who like this one would be From Maid to Mother.

Now, onto my un-pirated recommendation.  But before I get to that, I’d like to express how difficult it can be to find the kind of manga I’m looking for.  Because of cultural differences and sometimes because of manga’s general tendency toward wish fulfillment, sometimes they include elements that don’t really gel with American sensibilities.  One recent series that has raised a few eyebrows in three different forms (light novel, manga and anime) is Do You Love Your Mom and Her Two-Hit Multi-Target Attacks.  The series is about a 15-year old boy and his mother who get transported to another world.  The problem is that the series finds humor in placing the two characters in awkwardly sexual situations with each other (though, I give the series credit for including an attractive woman over 30 in the form of the mother.  So often, the good-looking characters in manga and anime are teenagers or barely out of their teens).  Probably the most infamous series of the like is Usagi Drop, which starts out looking like a story of an unprepared man learning to care for his adopted daughter ends up being a story about a man who raises the woman who eventually becomes his wife from childhood.  It’s definitely a strange idea from an American perspective.  I don’t think it’s common in Japan today but it does have historical precedence and even shows up in probably the most influential work of fiction in all of Japan The Tale of Genji.  That’s what I’m afraid is going to happen with that Middle-Aged Adventurer manga I listed above.  So, for this I’m going to pick Sweetness and Lightning by Gido Amagakure. 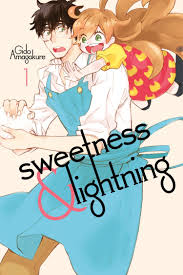 Sweetness and Lightning is the story of a widowed schoolteacher named Kohei who’s struggling to raise his daughter Tsumugi by himself.  This is particularly the case in terms of cooking healthy meals.  Things change though when he makes friends with his lonely student Kotori whose culinary expert mother is always working.  Together, with the aid of Kotori’s mother’s recipes, the three of them tackle the job of learning to cook and bond over the food they make.  It’s sweet, heartwarming stuff.  I will warn you that I think Kohei and Kotori might end up as a couple toward the end, but that’s a taboo to discuss on another day.

So, there are my choices for manga on the grown-up subject of parenting.  As always, keep an eye out for official releases and happy reading.

Posted by Adam Hoffman at 6:15 PM No comments: