Okay, folks.  I’m going to talk about one of my favorite manga and anime series.  So hang on folks, it might get a bit . . . spicy.

A little background on myself first.  I’ve been a manga fan since the early 2000s when it hit big on the American comics scene, especially as something sold in book stores.  Anime, on the other hand, was a little more elusive.  During those days, anime was mainly found on DVD releases and bit torrents with some limited airings on TV (mainly stuff like Cartoon Network’s Toonami).  Streaming services that aired it like Crunchyroll were barely even a thing yet.  Or at least, were barely acknowledged as a thing in the days before Netflix brought streaming to the mainstream.  So, since I was familiar with American comics, it was as manga that I most embraced these stories.  However, it’s also probably because I was so used to American comics and the whole superhero scene that I tended to seek out things other than typical fantasy action stories to read as manga.  Namely, detective stories, sports stories and cooking stories.  And it’s that last one that I’m going to talk about here. 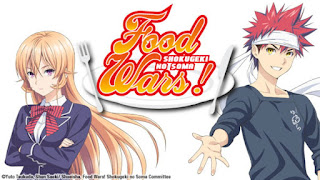 The manga/anime in question is Food Wars, known in Japan as Shokugeki no Soma.  And yes, it’s a very popular series, but I’m going to talk about it anyway.

Food  Wars is a cooking manga.  A cooking manga that I’ve been hooked on since volume one (not to sound hipster-ish, but “way before it was popular”).  It’s also a manga that hinges rather heavily on cooking competitions.  The funny thing is that while I like cooking, I’ve never really cared for cooking competition shows.  But manga has a way of getting me to read about things that aren’t in my usual repertoire.  I also don’t particularly like football, but would not pass up a volume of Eyeshield 21.

The story of Food Wars is about a young man named Soma Yukihira.  Soma loves to cook and work alongside his father at the little local family restaurant that they work at.  Soma is also very competitive and has lost against his father in cooking competitions over a hundred times.  He also likes to create strange new dishes and overly enjoys seeing people try them, even when they’re awful.  One day, Soma’s father announces that he’s closing up shop to go travelling and that he’s enrolling Soma in the Totsuki Institute, an elite culinary high school that’s so strict and so competitive that it only has a 1% graduation rate.  It’s an intimidating place and Soma doesn’t make it any easier for himself, managing to piss off practically the entire school and get on the bad side of the headmaster’s granddaughter on the first day (though he does make a few friends in the Polaris Dormitory).  Can a plucky, blue-collar diner brat succeed and thrive in a competitive school full of culinary elites?  Well, let’s just say that it’s a good thing Soma never gives up.

So, that’s basically the gist of it.  But you may be wondering: how do you make a manga or anime about food?  Food is about one part visual and nine parts smell and taste.  Well, this is part of what makes Food Wars popular but also infamous.  You see, this isn’t the first series based around food.   Others have existed and what they have focused on is the visual of people reacting to the food.  One series, Yakitate Ja-Pan, is a manga (and later anime) about baking bread.  One thing that series did was show people reacting to how good the bread was in really big, over-the-top ways.  Another series which hinged a lot on food was the slice-of-life show Gourmet Girl Graffiti.  And one thing that show did was make the reactions a lot smaller but also a bit more  . . . alluring (a little moan here, a little “ooh” there, but nothing too explicit).  What Food Wars did was combine both of these reactions and, well, let me just show you a clip . . .

So, Food Wars is a cooking competition manga aimed at teenage boys (did I mention this was a Shonen title?) with uncommonly provocative artwork.  Is that it?  Is that all there is to it?  Well, not quite.  There are other little bits that give a little added depth of flavor.  Self-expression through cooking becomes a pretty big theme.  Classism is an underlying theme as well, especially as it concerns how other cooks interact with Soma.  There’s even a big status quo shake-up at one point that manages to shift the whole concept from cooking to survive high school to cooking as act of rebellion.  But my favorite, somewhat low key, theme is that of finding one’s own tribe.  It’s a big theme in a lot of pop culture these days and butts right into the whole “found family” thing (currently exemplified by the Fast and the Furious movies, but X-Men has been doing it since the ‘80s and Joss Whedon has been doing it since the late ‘90s).  The “tribe” in this case are the students who live at the Polaris Dormitory.  While most of the Totsuki students are rich and manage to live off campus, there are a certain few students who have to live in the dorm.  They’re also all kind of crazy, kind of quirky and practically experts in their own cooking methods.  Yuki Yoshino is a specialist in cooking wild game.  Shun Ibusaki is an expert in smoking food.  Zenji Marui is a master of the more academic side of cooking.  And Ryoko Sakaki is a specialist in the art of fermentation.  And that’s just a handful of the characters there.  There’s just something gratifying about watching all these mad food geniuses interact.  They become their own little pseudo-family of fantastic characters and they become even more important around volume 17 when they take in a rather important new roommate (I won’t tell you who in case you want to read it for yourself).  I’ve said before that the Polaris Dormitory is Food Wars’ secret weapon and I stick by that. 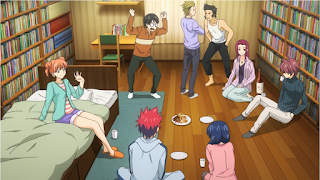 It’s not perfect, though.  And a lot of the flaws in Food Wars have to do directly with the main character, Soma Yukihira.  First of all, Food Wars has always had a bit of stakes problem.  Basically, the stakes were always a bit too high.  Soma would get into cooking competitions called Shokugeki rather regularly.  But the stakes of the competitions would almost always be that Soma would have to give up cooking or would be expelled from Totsuki.  This means that Soma pretty much always has to win, because if he doesn’t win then the series would have to end as it lost its main character.  So, it becomes less a question of “Will Soma win this?” as “How will Soma win this?”  And while that’s fine, it would have been nice if there were a few more smaller stakes competitions that Soma could have lost and learned from along the way.  The other problem with Soma is that, well, he’s a bit of a dope.  Okay, that’s a bit harsh.  But he is a bit one-track, which makes him seem a bit duller and less complex than the other characters.  There are some really good characters in this series.  Megumi Tadokoro is a great character who evolves from a timid little country girl to a culinary fighter.  Akira Hayama is a great character, especially when it comes to his past and complicated relationship with his guardian.  Erina Nakiri is a great, complex character and has one of the most significant character arcs in the series.  Meanwhile, Soma’s entire character is about getting better at cooking and getting others to acknowledge that he’s good at cooking.  That’s basically it.  However, the fact that he’s always learning from his classmates and from his own mistakes as well as his own mistakes somehow allows him to act as a catalyst for pretty much every other character’s growth.  Again, that’s fine, but I wouldn’t mind having a little more.

But that’s enough of that.  If I haven’t convinced you to check it out yet, then I’m probably not going to.  But I sure hope you do, because for all its craziness and infamy, Food Wars is a series worth biting into.
Posted by Adam Hoffman at 2:22 PM No comments: