I know I talked about tokusatsu before. But I don't tend to talk about the specific tokusatsu I watch all that much.  That's because I don't always get a hold of them in the most copyright-friendly ways. Though I would if I could (seriously, if someone could offer this series on DVD with subtitles, I would totally buy it).

I'm going to break that streak here because I just rewatched a bunch of Kamen Rider Fourze.

Kamen Rider Fourze is the Kamen Rider series that started in 2011 and was made to celebrate the 40th anniversary of the series (Fourze is a portmanteau of "Four" and "Zero").  I rewatched Fourze largely because it's just a fun, positive series. However, I want to talk about it because as an extension of my other interests, I have an interest in little cultural bits that show up in media. Especially when those cultural bits clash and combine. And you see, Kamen Rider Fourze has two big motifs that run through it. One, is space. The other . . . is high school.

Both Japan and the US have a bit of an obsession with high school to the point that they've broken them down into different motifs and stereotypes used to tell stories about it. Whether or not any of them actually reflect the actual high school experience is beside the point. The thing is though, that they're completely different approaches. Here in the US, high school is often depicted as an ordeal of sorts. Filled with awkwardness, embarrassment, cliques and a strict social pecking order. Anyone who's seen a teen movie knows what I'm talking about. Japan, on the other hand, tends to view high school as one of the last gasps of youthful freedom before entering the adult world. Kind of like college is in the US. There's often a focus on young love and bonding with friends in after school clubs and activities. There was also a brief fascination with juvenile delinquency that made it into a lot of their media during the late '70s and into the ‘80s (manga like Cromartie High School and Sukeban Deka, for example). 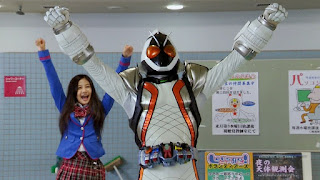 Kamen Rider Fourze, despite being a show entirely aimed at Japanese kids, decided to go with both.

It had the uniforms, the clubs, girls confessing their feelings via letter (it’s a thing in Japanese shows set in high school).  And the main character, Gentarou, at least dresses like one of those delinquents from an ‘80s manga (I think the specific term is yanki).  I can’t remember if their were any scenes of characters eating their lunch on the roof (another trope out of high school anime) but it wouldn’t surprise me.  However, they also fill the school with cliques and in-groups like in an ‘80s Hollywood teen comedy.  How much did they incorporate?  A lot.  Sometimes more than you think they should.  For example, they did that bit in American movies where the football players and cheerleaders are the ones who rule the school.  That’s right.  Football players and cheerleaders.  There are just a few problems with that concept.  For one, American football isn’t particularly popular in Japan.  For the other, the social values of Japan and many other East Asian countries don’t quite lend themselves to that situation.  I mean, I’m sure they like high school sports but every other piece of media I’ve seen suggests it wouldn’t be enough to establish any sort of social structure from it.  Heck, academics are so valued in most East Asian countries that you’d be more likely to rule the school if you were on the honor roll. 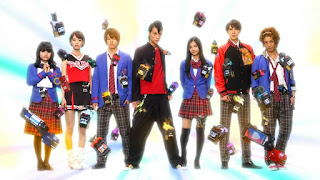 But, they make it work.  How?  Well, for one they suggest that the specific social structure of the school is perhaps unique to that school.  Gentarou when he first comes in doesn’t understand why it’s some huge deal if he tries to sit at the cheerleaders’ table because it was nothing like that at the school he transferred in from.  Seeing as the school is rather strange anyway, for reasons of monster attacks, it’s easy to believe.  The other is by combining ideas.  It has the clubs and it has the cliques and it combines them by having Gentarou’s unofficial, unapproved monster-fighting Kamen Rider Club essentially become The Breakfast Club.  The club starts with Gentarou (delinquent-esque), Yuki (geek), Kengo (loner, also the guy whose father invented all the Fourze tech), but then expands to include Miu (cheerleader), Shun (jock), JK (goof-off) and Tomoko (goth) as well as Ryusei, another exchange student who turns out to be Kamen Rider Meteor.  And all this is rendered in the big, over-the-top style that only tokusatsu can manage.

The show might not be for everyone.  But I like it and I think the clashing and combining of cultural storytelling tropes and stereotypes certainly makes it an interesting sight to see.

Posted by Adam Hoffman at 1:28 PM No comments: