The Mother of all Superhero Posts.

In about 64 different countries on this planet, including the United States, China, Zimbabwe, Japan and many others, the second Sunday in May is set aside as Mothers Day.  Now, it just so happens that this Mothers Day in Japan the Toei company will release a special for its Super Sentai fan club members entitled Hero Mama League.  In this special, three heroines from past seasons of Super Sentai (Hurricanger, Magiranger and Dekaranger respectively) will be shown as married women and mothers trying to balance saving the world with raising a family.  Here’s a trailer.  Keep in mind that it’s just the first part of the video.

To say the least, I am intrigued.  For one, as a thirty-something, I’m kind of curious to see what happens to these characters when they reach my age.  For another, it shows an international extension of a trend I’ve noticed happening in some superhero media.  I’m talking about the rise of “superhero moms”.

Before I start going on about depictions of motherhood and maternal narratives in comic books and superhero fiction, let’s flash back to 2015.  The movie Avengers: Age of Ultron has come out.  Much of the world is excited to see how the character of Black Widow as played by Scarlett Johansson would be developed.  The reason being that by default Black Widow had managed to become the most well-known superheroine in the world.  People were met with dismay when the biggest developments turned out to be that she had started a romantic relationship with Bruce Banner and the reveal that the shady espionage agency that she had once worked for had forcibly sterilized her.  It seems folks out there (notably female movie-goers) weren’t happy with the badass super-spy’s development being reduced down to who she was dating and whether or not she could be a mommy (the “I’m a monster” line didn’t help either).  I bring this up because I wanted to acknowledge that I get that this stuff is . . . tricky.  While motherhood is a possible development for female characters, the media has for too long treated it as the ultimate development for female characters.  It’s a practice that’s outdated and should be replaced with a greater variety of possibilities.  However, I also wanted to bring this up because I wanted to point out how differently comic book readers can perceive things.  You see, I just kind of shrugged it off and thought “well, that figures”.

You see, in superhero comics heroines becoming mothers, or any kind of maternal narratives for that matter, are very rare.  I mean, it’s rare for almost any superhero to become a parent despite some outliers, but there still seem to be paternal narratives all over the place.  Superheroes are always getting hung up on their fathers or father figures and what their fathers said or trying to be better than their fathers if said fathers happen to be evil.  Both of Bruce Wayne’s parents died, but when he reflects on it he usually focus on Thomas Wayne rather than Martha.  Superman’s entire planet went kablooey, and he still focuses mostly on the loss of his father Jor-El.  You get the gist.

Now, like I said, there were outliers.  At Marvel, the Inhuman Crystal had a daughter named Luna with her husband, the mutant Avenger Quicksilver.  The second Spider-Woman, Julia Carpenter, first appeared on the scene with a school-age daughter from a failed marriage.  But the most well-recognized superhero mom was probably the Invisible Woman from the Fantastic Four.

The Invisible Woman becoming a mother was kind of an obvious choice to make when it was made.  Of the few superheroines they had back then, she was married and the most stable.  Also, the Fantastic Four already seemed like a nuclear family with the Human Torch and the Thing subbing in as the bickering children of the group.  Looking back on it, it was a simple no-brainer development but kind of a big deal for 1968 when it first happened.

Most of the other times superhero comics attempted to tackle anything related to motherhood or the pregnancies that often preceded them, the results were . . . cringeworthy.  I don’t want to lose anyone but these examples are downright bonkers and surprisingly heavy on continuity, but I feel the need to include all these bad examples.  Links will be provided.  So, here goes . . .

There was the time Scarlet Witch had twin sons with her android husband only for them to be revealed to not be real in the first place.  There was the time Power Girl experienced an immaculate conception only for the magical baby to grow up super fast and disappear.  There was the time Ms. Marvel was essentially raped and gave birth to the reborn form of her rapist who she then ran off with.  And of course there’s Mantis and all the general weirdness of the Celestial Madonna and Celestial Messiah stories.  There’s also just the terrible mother that is Mystique.  Oh, and apparently, the Huntress functionally adopted a kid only for everyone to forget it even happened.  And this isn’t even covering situations where someone meets their possible future child from an alternate timeline or whatever.

So . . . yeah.  Lots of sci-fi weirdness.  Lots of clumsy riffing on the Christian nativity story.  I know people like saying superheroes are modern mythology, but I think those stories are a little bit much.  Many of these stories seemed so steeped in their own weirdness that they kind of lost track of the human element.  There are more referenced in this forum thread.

But a funny thing has happened in the past decade or so.  At Marvel alone, at least a half dozen heroines have become mothers.  Off the top of my head, they include: Jessica Jones, the original Spider-Woman, Tigra, Jubilee, Smasher and Meggan.  Six might not seem like a lot, but it is compared to the past fifty years or so of Marvel history.

DC, on the other hand, hasn’t been boasting as much.  In fact, they kind of seem to have fewer maternal narratives than they used to.  The back stories of both Wonder Woman and Black Canary used to both hinge on the characters’ respective mothers and now they don’t (granted, it’s easy for Diana’s mom to get overshadowed now that they’ve revealed that her father is Zeus).  And yet, DC isn’t completely devoid of supermoms.  Batman is now the father of 10-year old Damian Wayne, whose mother is villainess and eco-terrorist by birth Talia Head.  Talia doesn’t seem to be a particularly good mom, but Damien will probably have Catwoman as a stepmom soon so we’ll see how that goes.  Superman also has a son named Jonathan Kent and whose mother is Lois Lane.  And though Lane isn’t a superheroine, she’s still pretty badass.  In fact, they just introduced a new character named the Silencer, an ex-assassin who has to fight against agents from her old life to protect her husband and three-year old son. 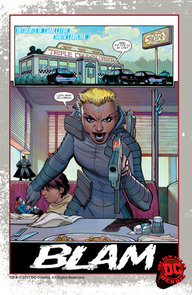 Not only that, they feature a number of women in different marital and maternal situations.
The original Spider-Woman, Jessica Drew, chose to go down the single mother route on purpose.  She reached a point in her life where she decided she wanted to have a baby, so she got herself artificially inseminated.  In addition to providing extra agency to the character in this case, it also proved to be rather effective bait-and-switch marketing.  After releasing this rather arresting cover online: 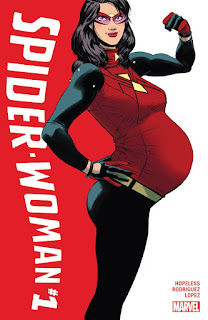 Fans went about speculating for a few months over who the father was only for it to be revealed that there was no father.  Or at least, no father of any importance.

Perhaps the youngest of Marvel’s supermoms (and one of my favorite characters) is the X-Men’s own Jubilee.
Canonically only 18 years old, Jubilee was away in Europe when a disaster situation struck.  In the chaos, Jubilee rescues an orphaned baby.  In short order, Jubilee decides she’s going to adopt the little guy and names him Shogo (I’m guessing the other X-Men helped grease a few wheels to make it happen).  It was an act that was impulsive and big-hearted and in that way, very Jubilee.  In its own way it also fits perfectly as a grown-up extension of Jubilee’s character, seeing as she started as an orphan in search of a family.  Now she’s giving Shogo what the X-Men gave her.

That’s just two examples.  The story with all the supermoms is different, but most of them vary from the more conservative situation used with the Invisible Woman back in the ‘60s.
The question becomes: why all this now?

Well, I think some of it has to do with the movies.  With the rise of Marvel Studios, the dynamic at Marvel has changed.  Instead of being primarily a comic book publisher, they’re primarily an intellectual property and media company.  The actual comic book publishing side has turned into Research and Development to hash out new story and character ideas to use for movies and TV shows.  So, this probably gives writers a little bit more wiggle room to do things with the personal lives of the characters.  At the same time, the movies have exposed the characters to a whole new audience including women and young girls.  So, writers and artists probably want to more positively depict events that can happen (but don’t necessarily have to) in a woman’s life.  It's a different audience than before.  The superhero genre doesn't entirely have to rely on the attention of 12-year old boys anymore.  That's the case with Hero Mama League too.  Since it's being made for the fan club, there are likely more older fans there.

Personally, I think the whole thing is a net positive.  I mean, I get if some people don’t.  A lot of media, as I mentioned before, has in the past reduced many a female character’s role to wife and mother.  However, those roles are still perfectly valid in their way.  And if comics and other superhero fiction are going to depict the role of mother, it’s better that they depict it well and intelligently rather than writing more cosmic messiah or fast-aging magic baby stories. 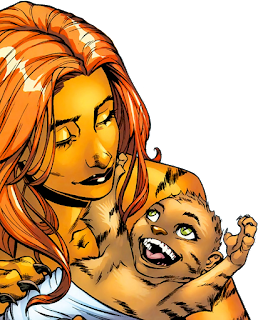 I realize I’ve only touched on just a little bit.  I didn’t even mention Helen Parr from TheIncredibles.  And if I push beyond superheroes there’s Alana from the space opera comic Saga.  Also, the new Duck Tales cartoon has based a major mystery around Huey, Dewey and Louie’s mother Della Duck.

But I think it’s time to wrap this up.  But I would like to say that as a 30-something man with no kids, I have much respect for parents of every gender.  It’s a tough job and one I’m pretty sure I couldn’t do in a million years (sometimes I feel I can barely take care of myself).  So, they’re practically superheroes already.

So, to all the supermoms out there both real and fictional, Happy Mothers Day!
Posted by Adam Hoffman at 4:28 AM