The thing about Universal’s output of horror films in the thirties and forties is that some stuff is likely to fall through the cracks.  Sure, most of the ones that were popular enough to spawn franchises became part of the Universal Monsters brand.  There is, however, one that didn’t. 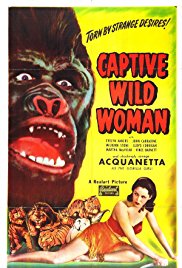 The movie Captive Wild Woman was released in 1943 starring Milburn Stone, John Carradine, Evelyn Ankers and Acquanetta.  The film extensively used footage from the Clyde Beatty circus film The Big Cage.  The film starts with Stone’s character of Fred Mason returning from a trapping expedition for the circus and meeting his girlfriend Beth Colman played by Ankers.  Mason then introduces Beth to a gorilla named Cheela that he brought back from Africa, which he claims is one of the most humanlike animals he’s ever seen.  Beth then tells Fred about her meeting with an acclaimed endocrinologist played by John Carradine.  The endocrinologist, Dr. Walters, is being called on to treat Colman’s sister for a rare glandular disorder.  He takes a rather keen interest when he finds out the Colman sisters both work for the circus.  Walters later visits the circus and takes an interest in Cheela.  Needless to say, Dr. Walters is a mad doctor with an interest in transforming some forms of life into other forms of life using glandular secretions.  He gets his hands on Cheela with the help of a disgruntled circus employee.  With glandular injections from Beth’s sister and a brain transplant from his own nurse, Walters manages to transform Cheela into a pretty human woman whom he dubs Paula Dupree (played by Acquanetta).  Paula isn’t quite human, though.  She has an uncanny way with animals, able to scare the daylights out of lions and tigers just by looking at them.  This nets Paula a job helping with an animal act, but things start to go pear-shaped when Paula develops an attraction to Fred Mason and starts to see Beth Colman as a rival.

It’s a fun little movie.  The use of other footage is done really well.  Acquanetta puts in a good pantomime performance as Paula Dupree.  And the Ape Woman make-up for the times when Paula is changing between ape and human forms is done by industry legend Jack Pierce and is very well done.  There are a couple of holes.  For example, the brain transplant that’s supposed to deal with Cheela’s animal instincts don’t seem to do much of anything besides show that Dr. Walters was willing to kill his nurse.

And that would just be the end of it in most cases.  A fun, obscure monster movie.  Except that this movie has two sequels. 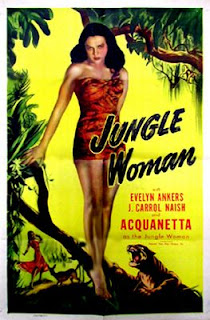 The sequel, Jungle Woman, was released the next year.  This film finds the body of Cheela who seemingly was killed at the end of Captive Wild Woman acquired by a doctor by the name of Carl Fletcher.  Fletcher finds out that Cheela is still alive and revives her.  Fascinated by the work of Dr. Walters, Dr. Fletcher purchases the sanitarium where he worked so he can look over his papers and equipment.  One day, Cheela disappears only for Paula to appear on the grounds.  Trouble follows though, when Paula develops another romantic fixation.  This time on Bob Whitney, the fiancée of Dr. Fletcher’s daughter.  This movie adds a couple of things to the “myth” of the Ape Woman.  First of all, the idea that Paula is incredibly strong even when in human form.  Second, the idea that the natives of Africa have stories about a strange doctor changing humans into animals to explain Cheela’s human-like intelligence.  What this does is adds a bit of ambiguity and mystery to Paula’s story.  It blurs the line between human and animal so you’re never sure if Paula is more human or more ape.  One big point against this movie though, is that Paula develops the ability to speak.  The real issue is Acquanetta’s line delivery.  A great number of her lines come across as flat and emotionless. 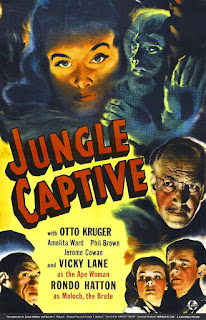 The third Ape Woman movie, The Jungle Captive,  came out in 1945 (boy, they put these movies out fast).  Paula’s body once again finds itself into the hands of a mad doctor.  This time, Paula is played by Vicky Lane.  The doctor, Mr. Stendahl (Otto Krueger), with the help of his hulking assistant Moloch (Rondo Hatton) once again manage to revive Paula only to find that her mind has reverted completely to a bestial state.  Stendahl decides that another brain transplant is necessary and has decided one of his female lab assistants from the university is the unwilling donor.  The movie isn’t as much about Paula as it is about the mad doctor who wants to operate on her and the lab assistants who find themselves wrapped up in the whole thing.

But still, there it is, a whole trilogy of Ape Woman films.  It’s as many films as The Creature from the Black Lagoon got.  Heck, it’s more than The Wolf Man got.  After his first outing, he had to share billing with other characters.

So, why has the Ape Woman faded into obscurity.  Well, a good part of it is probably because the racial and sexual politics of these films is more than a little dated.  The actress Acquanetta, real name Mildred Davenport, was known for being rather cagey about her ethnicity.  At the time of these films, people used to speculate on her race.  Some claim that she was at least partially African-American.  Others claimed she was from Venezuela, nicknaming her “The Venezuelan Volcano”.  Others claimed she was a Native American of Arapaho descent.  Overall though, these movies doubled down on the idea of her as being this racially ambiguous “exotic” jungle woman.  It’s something that would have been seen as alluring at the time but insensitive now.  The resulting films though, are entertaining.  The thing about Universal being the undisputed kings of horror during the ‘40s is that even their films that weren’t ground-breaking or genre-defining were still rather watchable.  Though, you can tell they were really running out of steam by 1945 when The Jungle Captive came along.  It is too bad these movies and the Ape Woman never became as iconic as the other Universal Monsters, though.   I mean, there aren’t really any other female monsters that aren’t defined by their relationship to another character (like The Bride of Frankenstein or Dracula’s Daughter).  The concept certainly has potential.  It’s kind of like being able to narrowly focus on one of the beast-people from H.G. Wells’s novel The Island of Dr. Moreau.  But these movies are still out there on DVD for those who want to see them.  Captive Wild Woman is available on the Universal Horror Classic Movie Archive set.  Jungle Woman was released as part of the Universal Vault Series.  The Jungle Captive has not been released on DVD, but I did notice that there’s a copy taken from an old VHS tape that’s been uploaded to YouTube if people really want to see it.

This is just the tip of the iceberg when it comes to hidden gems from the Universal Horror catalog, but those are a subject for another day.
Posted by Adam Hoffman at 5:11 PM