Well, if the last two posts got you guys thinking that I’m some kind of classic monster purist, then boy are you in for a surprise.

Just like a lot of people, I grew up watching the goofier monster stuff too.  I recall watching reruns of The Munsters on TV and cartoons about vampire ducks.

But the one comedic/children’s entertainment monster trope I want to talk about right now is the “school for monsters”.  In a way, this post is a spiritual successor to the post I wrote on Fairy Tale Fandom about “fairy tale schools”.  There are a couple of differences, of course.  For one, I don’t have to write out a whole list of them because TV Tropes already composed a list that’s right HERE.  The other thing is that unlike all the fairy tale school properties that seemed to pop up over the last few years, the monster school trope has been around for decades.

Now, keep in mind, I specifically mean schools that are meant to cater to monsters (with maybe one or two human students as “fish out of water”).  This does not count situations where monster kids go to school with human kids, like in the Fifth Grade Monsters books I read as a kid.  It also doesn’t include other establishments for monsters.  I am aware of hotels for monsters, summer camps for monsters and farms full of monster animals, but they’re not taken into account here.

Before we go any further, I’d like to show you the variation of this trope I had when I was a kid.  Ladies and gentlemen, this is Rick Moranis in Gravedale High:
If there was ever a show that screamed “90s Saturday mornings” it’s probably this one.  It’s even one of those celebrity tie-in cartoons that were common back then.  Why someone thought the idea of Rick Moranis as a human teacher at a school for monsters was such a winning idea with kids, I’ll never know.  But still, it hit all the monster archetypes, all the high school stereotypes and then some.  There was Vinnie Stoker, a cool greaser vampire.  Reggie Moonshroud, a nerdy werewolf.  Duzer, a sort of valley girl gorgon.  Gill Waterman, a slacker/surfer swamp creature.  J.P. Gastly, a rich kid . . . um . . . um.  Honestly, I’m not sure what kind of monster J.P. was supposed to be, but he sounded kind of like Peter Lorre.  But yeah, they covered all the bases, sometimes twice.  I mean, between Frankentyke and Sid the Invisible Kid, they had two different takes on the “class clown” character.  Overall though, it was just a really average ‘90s kids cartoon that cribs from shows like Happy Days and Welcome Back Kotter  as well as the Universal and Hammer Studios monsters.  Though it does show some of the standard parts of this trope.  One is juxtaposing classic horror archetypes against everyday school stuff, showing that the monster students are “just like us” while also being very different from us.  The other is puns.  Lots and lots of monster-related puns.

I tell you though, I’ve seen practically every variation of this trope in researching this post.
I read Marc Sumerak’s graphic novel All Ghouls’ School.  It seems to be something of an underappreciated comic seeing as it ended on a cliff-hanger with no follow up.  However, it was pretty well-written and had some strong themes in regards to bullying.

I discovered that there’s a pre-school cartoon called Super Monsters on Netflix that uses the idea of a “pre-school for monsters” but adds a bit of a superhero twist.  The show plays up the idea that each monster kid has a “super-power” and even gives them a transformation sequence that happens when the sun goes down.  It’s a cute and harmless show.

I found an Australian live action puppet show for kids titled Li’l Horrors.  The show only seems to partially take place in a school.  The rest happens at the estate of an old horror movie starlet where a bunch of monster kids live.  This one has to be seen to be believed.  Largely because the puppets in this show seem to walk a very fine line between cute and creepy.  There are a couple of decent gags in it, though.  I love the one about how the zombie kid is constantly watching TV.

I’ve also long been aware of the variations aimed more at teens and adults like the webcomic Eerie Cuties and the manga Rosario+Vampire.   One notable thing about those is that they take advantage of their older audience to touch on more adult, often sexual, situations (both have had a succubi in their main casts of characters).

The main thing that comes up when looking at all this is the question of what makes a trope.  Or rather, what makes a trope seem so appealing that people will visit it over and over again?  And what makes any use of the trope popular enough that it can last for years on end?

Well, in terms of the former question, I think I can echo some of the same things I said with the “fairy tale school” post.  For a young audience, there’s a certain relatability connected to putting characters in a school setting.  However, the fairy tale school concept plays somewhat on the idea of school as a journey from “once upon a time” to “happily ever after”.  The monster school trope has an undertone that plays more on the idea of school being an ordeal.  To some extent, especially when adolescence is reached, there can be a certain amount of anxiety associated with school.  In other words, school can be a scary place.  So, why not play on the idea of school being “a living nightmare” in a tongue-in-cheek way by depicting it as literally being “a living nightmare”?  Who the nightmare is for changes depending on who is the viewpoint character for the series.  In All-Ghouls’ School, the main character is a normal girl named Becca Norman.  In that case, the anxiety is about her classmates and fitting into social situations.  In Gravedale High, the primary character is the human teacher Max Schneider.  While the students do have their own storylines and parts to play, the main source of anxiety seems to come from whether or not Mr. Schneider can help the misfit class of monster teenagers he’s been assigned.  You get the gist of what I’m talking about here.

As for the second question, for that I think we should look at probably the most successful take on the monster school trope: Mattel’s Monster High. 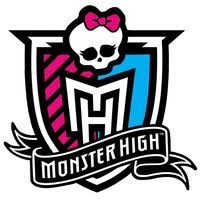 Monster High started as a line of fashion doll line launched in 2010 (sidenote: For a 30-something guy with no kids, I seem to blog about fashion doll lines more than you’d expect).  Naturally, with the line’s runaway success, it also spawned a web cartoon, straight-to-DVD movies, books and other merchandise.  The line originally started with five characters: Frankie Stein (Frankenstein monster), Draculaura (vampire), Clawdeen Wolf (werewolf), Cleo DeNile (mummy), Lagoona Blue (sea monster) and Deuce Gorgon (gorgon).  Though, many, many more were eventually created.  Now, I have dabbled in watching some of the Monster High media through the magic of the internet.  It’s an interesting phenomenon if nothing else.  The idea of marketing monsters to little girls seems unusual and daring, especially as conventional (read as: kind of sexist) logic dictates that little girls don’t like things that are creepy.  It’s also probably the first line of dolls to embrace a slightly goth aesthetic.  It was one of the first toylines for girls that questioned exactly what young girls were into and would respond to.  After it proved successful, a number of other unconventional lines of dolls would be spawned.  And it seems that the line isn’t ready to stop anytime soon as it just got a fresh coat of paint this year with a reboot of sorts.  Before the reboot, the media associated with the line had much more of a “slice-of-life” slant.  This is probably because they were originally set in a world that was very monster-oriented, right down to there being monster versions of real places (Boo York, Boo Hexico, Scaris, etc).  The post-reboot Monster High seems to be a bit more adventure-oriented as Monster High is now located in the human world and a lot of the web cartoons seem to focus on seeking out and recruiting new monsters to go to the school.  But the one thing that’s consistent in both versions and the thing that I believe makes it so popular for seven years is a strong sense of theme.  And that theme is “self-acceptance”.  Basically, the line equates being a monster to being a flawed and unique human being.  The idea is that everyone feels like a monster sometimes.  Everyone feels strange or freaky or like their flaws are too great.  The theme is that that is a good thing.  It’s good to be a unique, flawed, dynamic human being.  In other words, it’s good to be a monster.  I think that is what kids respond to most and keep this property going.  It’s also what a lot of the other “monster school” properties lack and the reason that most of them didn’t last all that long.  I can’t speak for some of the foreign properties, but the American versions usually don’t have much of a shelf life.  The only one that I think comes close in terms of having as strong a theme is All-Ghouls School and I feel that one failed more because it couldn’t find an audience among comic book readers (it probably would have done better as a cartoon show).

I’m afraid that brings us to the end, though.  And now I’ve examined and dissected another facet of the “special school” storytelling trope.  The only other type that’s done nearly as much as fairy tales and monsters is the “school for superheroes”.  But that’s a post for another day.
Posted by Adam Hoffman at 6:00 PM