Ode to a Mallrat.

Oh, Jubilee, why do I love thee?  Let me explain the ways.

There’s almost a certain futility in trying to explain why a certain character is your favorite.  Especially in a franchise as stuffed with good characters as the X-Men.  So much of it comes down to being the right age at the right time and encountering the right story under the right circumstances.  So, forgive me if this post ultimately doesn’t communicate what I’m trying to communicate. 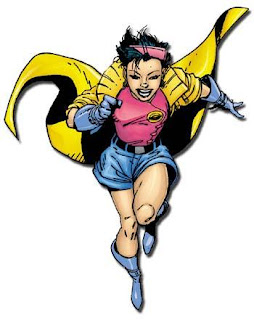 But let’s rewind to first contact, shall we.  The year is 1992. On the newly formed Fox Kids line-up of children’s shows, a new and potentially groundbreaking animated series debuted.  It was based on the comic book series that had been Marvel’s bestselling title for almost two decades.  It was called X-Men.  The show featured a cast of both old and new heroes from the X-Men’s history.  There was Cyclops, Wolverine, Storm, Gambit, Rogue, Jean Grey and Beast.  And then there was Jubilee.  Voiced by Alyson Court (known for a number of kids’ shows like the Beetlejuice cartoon and the pre-school show The Big Comfy Couch), she was depicted as a young girl who was confused and scared by her mutant powers and worried about how it would affect her relationship with her foster parents.  It’s a fairly decent, dramatic start.   However, after that her depiction on the show  was . . . not great.  It’s not that cartoon Jubilee was a bad character exactly (though, some X-Men fans will disagree).  It’s that she was kind of designed to serve a purpose.  She was one of those kid characters created for children’s action shows that was there mainly so kids would have someone to relate to and who could ask questions about things so that the kids at home wouldn’t be lost.  She was an orphan, which made it very easy for Jubilee to join the X-Men for adventures, yet she also conveniently didn’t have any past that could play any significant part on the show (on one episode it was boiled down to “bounced around between foster homes”).  And her mutant power was shown as being weak enough that she couldn’t possibly upstage her elders in terms of super-powered feats.  Granted, Jubilee’s depiction was probably pretty good for the time, but in retrospect it seems a bit lacking. 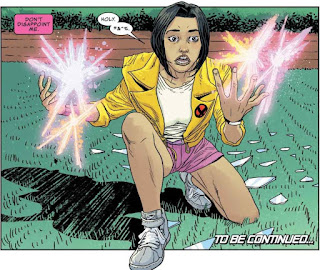 Little did I know, comic book Jubilee was something else entirely.

The comic book version of Jubilee first appeared in 1989.  The story, according to the 1989 Marvel Universe Handbook is that she is the first generation American-born daughter of two prosperous Chinese immigrants.  She lived a life of wealth and privilege in Beverly Hills until one fateful weekend when her parents were killed in a car accident and all their investments were wiped out in a stock market crash (presumably the 1987 one).  With nowhere else to go and no one to turn to, she ended up in Los Angeles County Juvenile Hall, where she quickly learned to rebel against authority.  Then she was sent to where she probably should have gone in the first place, an orphanage.  At this point, Jubilee didn’t like her prospects and was afraid she might end up getting sent to whatever living relatives she might have in China.  Not wanting to be sent halfway around the world to a country where she didn’t know anyone or anything, she ran away to the only other place in her life that felt like home: The Hollywood Mall where her mutant power manifested. That power being the ability to project articulate, quasi-animate, transitory plasmoids.  Basically, she can shoot explosive bursts of plasma from her hands that look kind of like fireworks.   After that, a series of events led her to become the youngest X-Man at the time, including rescuing Wolverine from being crucified by a gang of criminal cyborgs called the Reavers.

Jubilee for much of her early appearances had a tendency of putting up a front.  She would act tough and crack wise and would have a tendency of complaining loudly about things she didn’t like.  But by the time I had started reading Uncanny X-Men, that façade had started to crack.  You see, the X-Men were having a really lousy year.  Collosus’s little sister Illyana had died from a mutant-killing virus.  Collosus himself had defected to Magneto’s isolationist asteroid Avalon.  Iceman had been put into a coma.  But possibly the biggest thing in regards to Jubilee was that Wolverine, who had long been Jubilee’s mentor and protector, had been injured in a story titled “Fatal Attractions” and had left the team.  Through the cracks in the façade, a different image of Jubilee was revealed.  One of a scared, sad, troubled kid who had lost her first family and was terrified of losing the second one that she had built with the X-Men.  These revelations and this development were all in the purpose of moving Jubilee to a spin-off with other young mutant characters titled Generation X (don’t mind the title, folks.  It was the ‘90s). 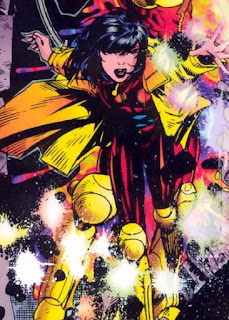 She’s strong, but not as tough as she acts.  She’s kinder and big-hearted than she pretends to be.  She tends to embrace life with vigor, but also has an impulsive streak that can get her in trouble.  Her power is potentially devastating, but she tries not to use it to hurt anyone.  Oh, and she has a big mouth.  But to me, the biggest thing was that Jubilee represented the found family aspect of the X-Men.  To others, that aspect might be represented by Kitty Pryde or Cyclops or Rogue, or whoever.  But to me, it was Jubilee.  Her need for a family really resonated with me.

Now, I haven’t read every Jubilee story.  There are a whole mess of stories from Wolverine’s solo series that I haven’t read that she’s in.  I also haven’t liked every story of hers I’ve read.  A while back they took away Jubilee’s mutant powers.  This resulted in her being reduced to a damsel-in-distress for a while.  I didn’t care for that.  Then, in the wake of Twilight fever, they turned her into a vampire.  Some people liked it because it gave her more physical powers.  I also didn’t care for that.  Granted, it seemed out of left field to me and the writers who wrote her seemed to forget what the vampire rules were on the regular.  Possibly my favorite event in Jubilee’s recent life is that she adopted a baby boy named Shogo. 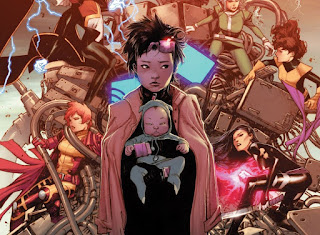 Yeah, it’s a strange turn of events in a genre that’s not usually kind to the concept of parenthood.  However, the way Jubilee went about it was both big-hearted and impulsive and in that way, very Jubilee.  Also, it gave Jubilee a more consistent tangible and grown-up connection to the whole “found family” thing that she can bring with her even when she’s not an active member of the X-Men.

I’m happy to say that Jubilee seems to be back on her way to being a more active X-Men character.  In the near future, she’s going to be a member of the reconstituted Excalibur.  But even if she wasn’t, she’d still be a favorite.  And I hope that, in my own admittedly clumsy way, I’ve expressed why.