You know, I really should write for Universes Beckon more than I do.  But sometimes there isn’t much I can write about.  What’s been happening in pop culture?  Well, there was some Muppet related stuff.  Playhouse Disney released an intro for their new version of Muppet Babies and people got upset about a new character.  Also, Nerdist reported that Disney is working on a new Muppets show for their new streaming service.  Okay, I guess this is it.  Let’s talk about Muppets! 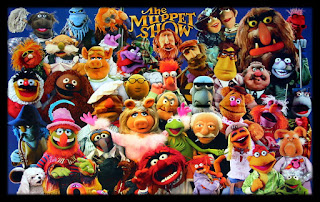 The issue in question for Muppet Babies is that the new version of it is introducing a new female character named Summer Penguin who will be a regular on the pre-school centered show alongside the characters of Kermit the Frog, Miss Piggy, Gonzo, Fozzie Bear and Animal.  Characters from the previous version of Muppet Babies Rowlf and Scooter are apparently not going to be on the show and the argument could be made that Summer is replacing another made-for-animation Muppet Baby: Skeeter.  The impact of the original Muppet Babies cartoon is a tricky thing to judge.  Muppet Babies is one of those “gap period” spin-offs (in this case, occurring between The Muppets Take Manhattan and Muppet Christmas Carol) that doesn’t seem like a big deal in the grand history of the Muppets franchise but came around at just the right time to be the face of the franchise for a lot of children of the ‘80s and ‘90s.  So, for those kids who are now parents, Skeeter was as much part of the gang as anybody.   I’m not really stressing over it myself.  In terms of characters, the more the merrier.  And I doubt Summer Penguin will be brought into the main cast for other projects.  Though, it is concerning that there is apparently such a dearth of memorable female characters in the franchise that they had to create a new one for both versions (what, they couldn’t have stuck Janice in there).  And even more confusing is that the show is aimed at pre-schoolers when the original show was aimed at the normal 6-11 Saturday morning demographic (though I wish the show luck).  But I’ll get back to that in a minute.

Honestly, as big a fan as I am, I tend to approach most Muppets projects these days with a bit of caution.  They seem to be a tricky property to get right or do successfully. 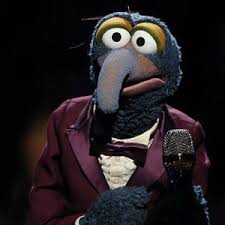 Before moving on, let’s address the Snuffleupagus in the room: yes, the Muppets have been different since Jim Henson died back in the ‘90s.  It’s an event I remember well.  Henson was a childhood hero of mine.  But we have to also admit that every media property is going to have to deal with the loss of their creator eventually, if they’re going to last long term.  And we can’t know that Henson’s productions would have kept the same vibe if he had lived another twenty years.  There’s many a creator who has lost his or her touch over time.  We have to focus on what Henson put into his projects at the beginning and where they’ve gone from there.

Now, a great number of post-Jim Muppet productions have been pretty good.  I’ve got a great love for both Muppet Christmas Carol and Muppet Treasure Island.  Muppets From Space on the other hand wasn’t so great.

The real issue seems to have started after the Walt Disney Company bought The Muppets.  From the beginning, I don’t think they were quite sure who they were going to aim these characters at.  They had some Disney Channel shorts in which the Muppets interacted with some very small children.  They also had some shorts in which they played music from Disney Channel original movies with the stars of said movies.  So, they seemed to move from preschoolers to middle schoolers pretty darn quick.

After that we got the Jason Segel movie The Muppets and its sequel Muppets Most Wanted.  Now, these movies were good.  I liked them both a lot.  However, they also kind of turned the Muppets into a nostalgia act.  The premises of both movies kind of call back to the Muppets’ two earliest films The Muppet Movie and The Great Muppet Caper (word is, the third movie would have been called Muppets on Broadway, calling back to The Muppets Take Manhattan).  The movies had good jokes, good energy, good songs and lots of heart but were clearly evoking nostalgia.  While the first movie did really well at the box office, the second one decidedly didn’t.  This might be a sign that nostalgia as a tool only goes so far. 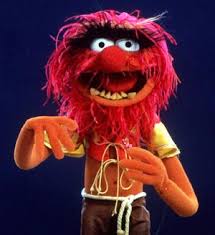 But then came the Muppets TV show on ABC.

The Muppets was a show done in a documentary style similar to The Office which followed the Muppets as they put on a late night talk show starring Miss Piggy.  One of the main aspects of the show was that it was a “more adult” take on the Muppets.

There’s one problem with making a Muppets production “for adults”.  The Muppets were never specifically aimed at kids in the first place.  No, really.  Just ask any Muppet fan.  Heck, ask Frank Oz (performer of Fozzie Bear and Miss Piggy).  He’s on Twitter.

So, what did they do to make the show “more adult”?

Well, Piggy and Kermit split up.  This prompted Piggy to struggle to redefine herself outside of the relationship.  Kermit then seemed to go into a midlife crisis in which he overate and dated a younger woman . . . er . . . pig.  The once daring Gonzo had lost his nerve as a daredevil and settled into life as a mediocre comedy writer.  The Electric Mayhem have settled into life as an in-studio band.  Fozzie had a decidedly awkward relationship with a human woman.  And a good chunk of the humor stemmed from the staff dealing with Piggy’s more outrageous demands all while she treated most of her friends like garbage.

Does any of this sound at all appealing?  Or funny?  Or like the good old Muppets we know and love?  Well, maybe to some people but not enough because the show lost viewers really early on and underwent a revamp midway through to bring in “more joy” and a new antagonist to take some of the heat off of Piggy.  It was a nice change, but it didn’t save the show.

Really, what it did wasn’t make the show “more adult” as much as it made it “more sad”.  It felt like their dreams of performance had become a grind and the friendships they had devolved into a sort of work-a-day office familiarity.  All the characters felt like they had gotten old and settled.  And we’re so used to seeing them strive that seeing them settle is rather off-putting.  And this isn’t just a problem with the Muppets, it’s a problem with how we view adulthood in general.  But I’ll get back to that one too.

But let’s run with this idea for a little while.  The Muppets as characters not only for adults, but as adult characters themselves.  How does that wash?  Well, let’s see.  Going back to the Muppet Show, they’re a group of professional performers well aware of the ups and downs of show business.  They had complicated relationships (Piggy loved Kermit.  Kermit didn’t love Piggy.  Gonzo loved Piggy.  Piggy was annoyed by Gonzo.  Gonzo moved on to find real love with Camilla).  They had a family of sorts in each other and they looked out for each other.  And despite the craziness, they all worked toward fulfilling their one primary responsibility: making sure the show went on.  It wasn’t always easy, either.  They always seemed to be a day late and a dollar short with the threat of Scooter’s uncle kicking them out of his theater always looming.

I have a little book of Henson-related quotes titled Wisdom from It’s Not Easy Being Green.  There’s a quote from Henson himself that says “The most sophisticated people I know- inside they’re all children.  We never really lose a certain sense we had when we were kids.” 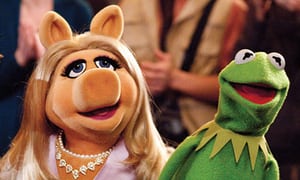 And that’s it, really.  The Muppets aren’t childish.  They can just see the world the way children often do.  They’re optimists and idealists.  They keep their ping-pong ball eyes and felt hearts open.  They’re adults who believe that dreams are worth chasing, laughter is the best medicine, nothing beats a good song sung together and that even failing is okay if you do it with your crazy showbiz family by your side.  They’re the ones at the Magic Store.  The ones who’ve found the Rainbow Connection.

The Muppets are the adults that a lot of us wish we could be.  And I think the fact that so many of us see adulthood as something depressing and filled with drudgery and unwanted compromise is probably not the healthiest way to go about it.  How long can we go around acting like becoming an adult is the equivalent of having the joy and optimism beaten out of us before it causes more harm than good?

I think that ultimately this is a little bit of Jim Henson himself that he baked into all these characters and concepts.  And I think that unflappable “youthful” optimism is why people continually misjudge who his creations are for.  The new Muppet Babies may be for pre-schoolers, but the original wasn’t.  It was for school-age children but a lot of people probably think it was for really little kids.  Fraggle Rock was for older kids too, but people would often lump it in the same category as Sesame Street.  And The Muppet Show was a variety show for the whole family and Henson’s way of proving he wasn’t just a children’s entertainer, and most people still refer to it as a children’s show.  Oh, well.

Henson may be gone, but that positive attitude shouldn’t be hard to sustain.  It really shouldn’t.  Either in a Muppet TV show or in life.

There’s more that could be said about goings on in the Muppet world and what makes the characters work.  The performer who played Kermit, Steve Whitmire, recently got fired and replaced by Matt Vogel.  Also, I’ve been following Frank Oz on Twitter and he’s said some interesting things about how much of the camaraderie between the Muppet characters actually came from the Muppet performers.  But I think I’d leave you instead with another quote from Mr. Henson:

“I believe that we form our own lives, that we create our own reality, and that everything works out for the best.  I know I drive some people crazy with what seems like ridiculous optimism, but it has always worked out for me.”

Until next time.
Posted by Adam Hoffman at 7:05 PM