You may have heard about the Super NES Classic Edition.  It sold out in record time.  Just like the NES Classic Edition did the year before.  I didn’t try to buy one because I saw it coming and saved myself the effort.  But what I’d like to talk about is the extensive and sometimes ridiculous lengths you sometimes have to go to in order to play older video games.

I’m a bit of a retro gamer myself and I’d like to show you all the various ways I’ve attempted to be able to play retro games.  See picture below. 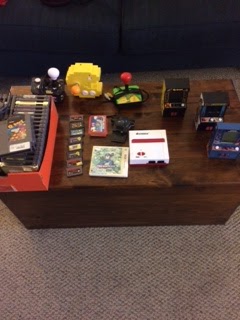 Crazy, right?  Old hardware and software, after-market consoles, plug-and-play devices, little working collectible arcade cabinets, compilation games and even card reading peripherals.  This doesn’t even show cell phone apps or virtual console downloads.  I’ve tried each of these things and they all have their own significant strengths and flaws.  The plug-and-plays are difficult to store and are limited in what games they carry.  The miniature cabinets and cell phone apps have awkward controls.  The after-market consoles don’t quite get the colors of the visuals right and rely on having working software, which is a problem in itself.  The virtual console downloads are arguably overpriced for a software download of an older game.  And as much as I loved my e-reader and cards back in the Game Boy Advance days, I’ll admit that the whole card scanning gimmick is actually kind of ridiculous.

And that doesn’t even cover emulators and roms.  Emulators are probably most people’s first choice for playing retro games.  An emulator is a program that emulates the workings of a video game console on a computer.  To play games on emulators, you need to upload a game’s rom (read-only memory).  Emulators and roms are big in the retro gaming community.  The reasons being that they’re usable on pretty much any modern PC, facilitate the playing of fairly authentic retro games, are easy to get a hold of and also allow for some flexibility in terms of what control scheme you use.  Some people have even been loading emulators onto small computers called Raspberry Pis in order to hook them up to their TVs.  There is a big problem with emulators and roms, though.  Emulators are great pieces of software, completely above board, and some like MAME (the Multiple Arcade Machine Emulator) are devised as a means of preserving and archiving gaming’s past for the future.  Roms on the other hand, are usually only attainable by illegally copying copyrighted video games and distributing them.

So, that’s the deal.  Usually the only ways there are to play retro games is to fiddle around with outdated technology, endure ridiculous gimmicks or break the law!  If you’re breaking federal law in order to play Super Mario Bros., there might be something wrong with this system.

You know what I’m waiting for?  The day that the home video game market is like the home video market for movies.  Think about it.  If you want to watch a movie from 20 years ago or more, it’s relatively easy.  Almost every movie or TV show is put on DVD as a matter of course.  There’s also no exclusivity.  Unlike dealing with the Sony, Microsoft and Nintendo video game systems which have their own console exclusives, you can play any DVD on any DVD player.  If you want to watch one of the Spider-Man movies which are produced by Sony, you don’t need a Sony device to do it.  There are very few unnecessary gimmicks or hoops to jump through in order to watch a movie on home video.  The problem is, as my brother (who’s more of a gamer than I am) rather passionately reminded me once, the market for video games just isn’t there yet.  And the truth is that there was a time when home video wasn’t there either.  During the early days of VHS, companies used to sell VHS tapes of movies for around a hundred dollars.  It wasn’t until they started running ads on tapes right before the movies that they started to become affordable (like this Diet Pepsi ad that was on the Top Gun VHS tape).  I  think the video game market will get to that point someday, but whether it’s 20 years away, 50 years away or 100 years away is something that I couldn’t tell you.

But what’s the big deal?  Why is retro gaming important and why do all these retro systems keep selling out?  Well, just respecting the medium’s past is part of it, but I think there’s more to the idea.  I can’t tell you for sure, but I think it may have something to do with the demographics of gamers and how the gaming market is evolving.  On the internet, it’s easy to see the gaming community split into two groups.  There are the hardcore gamers who are really into gaming and love having the newest games and the most up to date technology while investing a lot of time and attention into the hobby.  Then, there are the casual gamers who like mini games and party games and really like smart phone games that they can play on the run.  Basically, they like games but don’t get that invested.  Naturally, this is simplifying everything because nuance is hard to depict on the internet.  I think there’s a middle ground that isn’t getting credit.  A middle ground that I’m probably a part of.  Let’s call it the semi-casual gamer.  In this case, I’m talking about people who grew up with video games, who want video games as an entertainment option but don’t have the time or energy to make it a major daily pursuit.  These are people who can’t imagine not owning a video game console but probably wouldn’t buy all three competing consoles.  These are people who may choose to watch TV or surf the internet before playing a game but are still glad the option is there.  For people like that, retro games are probably pretty important.  Why?  Because retro games are a known entity that they can take advantage of when they do fit gaming into their schedule.  Playing a little bit of Mario, Contra or Street Fighter II is probably a lot more appealing than taking a chance on some new game they don’t know.  It also explains some of the continued popularity of Nintendo among adults.  Nintendo arguably makes games for a primary audience of kids, but they also provide a familiar product that adult gamers can get behind without doing a lot of research or taking a lot of risks.  I’d bet anything the NES Classic Edition and SNES Classic Edition pulled in a lot of these kinds of gamers.  The existence of this gaming demographic also says a lot about how far video gaming has come.  Imagine, video games have become such a major presence in some people’s lives that they’ve always got to be an entertainment option even if they’re not always first choice.

So that’s my deal as a retro gamer.  Too many hoops to jump through and a market that’s taking too long to get to the easy part.  But it will probably get there. 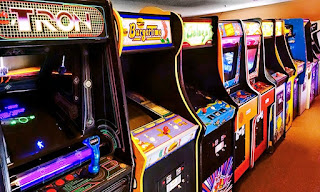 Of course, there’s also part of me that just wishes I could own my own ‘80s arcade complete with big, bulky arcade cabinets.  But that’s another thing entirely.