So, last week was the equivalent of the Super Bowl for pop culture junkies and the geek set: San Diego Comic Con (well, except for the pop culture junkies and geeks who actually like the Super Bowl, but you get what I mean).  There were a number of different announcements made over the course of the con.  However, one that caught my attention was the showing of the first trailer for the movie adaptation of Ernest Cline’s novel Ready Player One.

For those who don’t know, Ready Player One is a 2011 sci-fi novel set in the year 2044.  2044 is a world where everything is so bad, that most people would rather spend their time in an immersive virtual reality world called the OASIS.  The OASIS itself is a world designed by a reclusive pop culture obsessive named James Halliday.  When Halliday dies, it’s revealed that he hid an “Easter Egg” within the OASIS.  Whoever finds that Easter Egg inherits Halliday’s company, fortune and control of the OASIS.  Being the pop culture obsessive that he was, all clues to Halliday’s treasure are hidden within references to the pop culture that Halliday loved growing up in the 1980s.  This becomes the quest of the book’s main character Wade Watts (aka Parzival), a poor kid from an abusive home in a trailer park where the trailer are stacked one on top of each other.

I’ll admit it, I am rather fond of the book.  Partly because it was one of the first books I’ve read in months that wasn’t just for reviewing on my other blog (www.fairytalefandom.com, tell your friends about it).  But I thoroughly enjoyed the book regardless of the reason.

But I am also keenly aware that there are some people who really, really don’t like the book.  Probably because I follow at least one of those people on Twitter and they liked tweets from pretty much everyone else who doesn’t like it after the trailer dropped.  There are a number of criticisms of the book.  The author is accused of using various characters as self-inserts.  The obsession with ‘80s pop culture is seen as grating by some and soulless and self-indulgent by others (after all the main character is mainly interested in this stuff so he can win a contest and get rich).  And there are others.  I think I’ll just link to this article from TheRinger, which sums it up.

But let’s look at the trailer and address one of the more glaring things that might have set off the backlash:

Sounds like a bit much, doesn’t it?  A whole world of pop culture and a reference stuffed treasure hunt story is what gets branded a “holy grail”?  Really?

The problem is, it might not entirely be wrong.  Not if you consider the possibility that the trailer might be playing the same kind of game the book did.

Consider this situation: a group of knights set out on a quest with high stakes to find a relic belonging to the creator of the universe.  Now imagine that the knights are replaced with video game avatars and the universe in question is a virtual reality game.  The first sentence can describe the quest for the holy grail in Arthurian legend.  The second tweaks it to sound like the plot of Ready Player One.  And that’s just the thing, Ready Player One is more or less a grail quest made out of pop culture (well, part grail quest, part Willy Wonka golden ticket nonsense).  And the book isn’t really shy about this.  Late in the book, the movie Monty Python and the Holy Grail plays a big part.  And probably the most on-the-nose bit of all, the main character’s avatar is named Parzival.  For those who don’t know, Parzival (also known as Sir Percival) was the original grail knight.  In many later versions of the story, that role is often given to Sir Galahad, who’s depicted as some sort of perfectly pious knight.  Parzival on the other hand, is often depicted as either a commoner with a lot of potential or as someone of noble blood who was raised in the forest, ignorant of the ways of men.  In either case, he’s meant to be an unlikely hero to find the holy grail.  A poor boy who made good.  And that’s probably what Cline intended with his main character of Wade Watts.

So, there’s the off chance that the trailer is doing the same thing the book frequently does: dropping a reference.  But if it’s not just dropping the reference, then it sounds like some rather big hyperbole.
But now, looking at the book itself, I find myself asking “Is Ready Player One a great, well-written book? 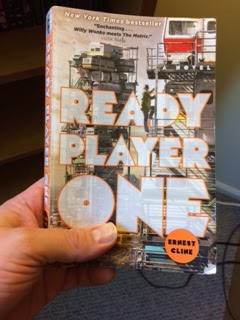 Rudimentary Arthurian references aside, while the book references a lot of things it never goes much deeper than that.  It doesn’t transcend the things it references.  It doesn’t use them to transform into something wholly different.  It also doesn’t embrace any deeper themes from any of them.  The love for past popular culture is essentially a love for these things as artifacts more than anything else.  Overall, it’s just a simple wish fulfillment treasure hunt story starring a young adult everyman protagonist.  There are even moments where I look at things in the book now and think they could have been handled better (for example, his courtship of fellow player Art3mis could have come across as a little less desperate on his part).

The book is flawed, but it’s still a lot of fun.  It’s essentially a beach read for those who don’t read romance novels or cozy mysteries while on vacation.  It’s also a beach read that may introduce you to other stuff you may want to check out.  I had never played Joust or listened to a Rush album before in my life, but I did after reading that book.  And while those things might not be my favorite things ever now, I’m still glad someone put the idea in my head to try them.  And overall, (and keep this phrase in mind, because it’ll probably become the credo of Universes Beckon) it’s okay to love flawed things.

But that’s enough for now.  Here’s hoping the movie is as entertaining as the book.

Later.
Posted by Adam Hoffman at 7:48 AM